When you were a child, did you play make believe by yourself? Did you have secret games, with intricate rules, that you refused to share with or explain to anyone?

I did. Mine was called Butterfly. Here is how I played it: 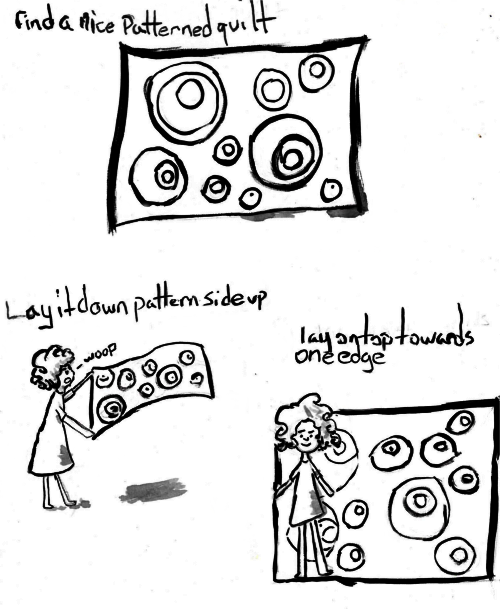 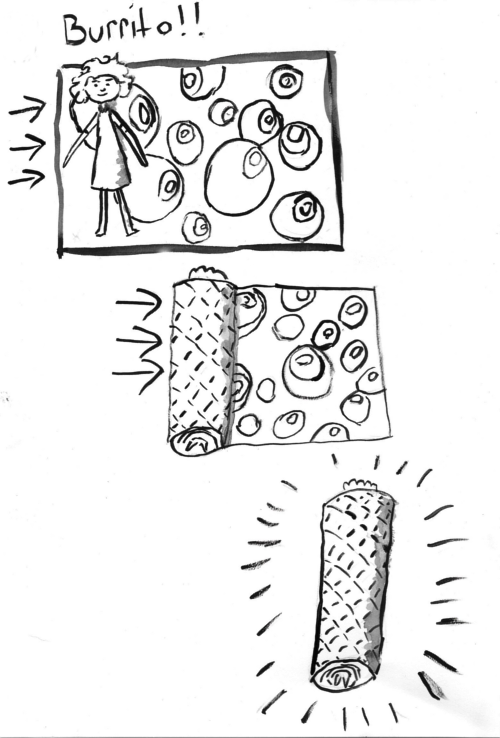 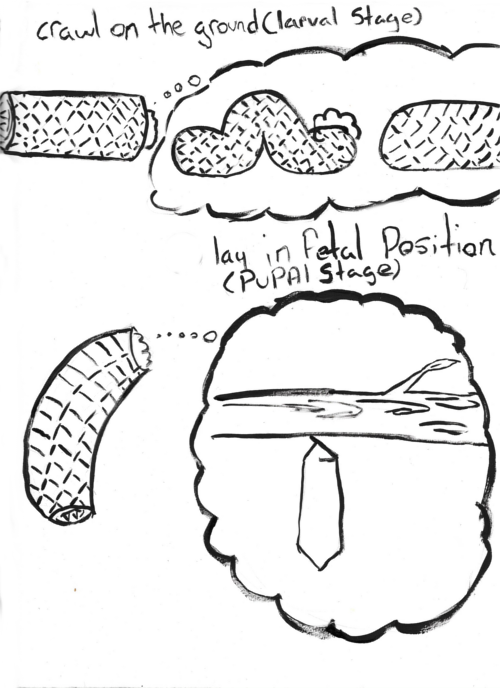 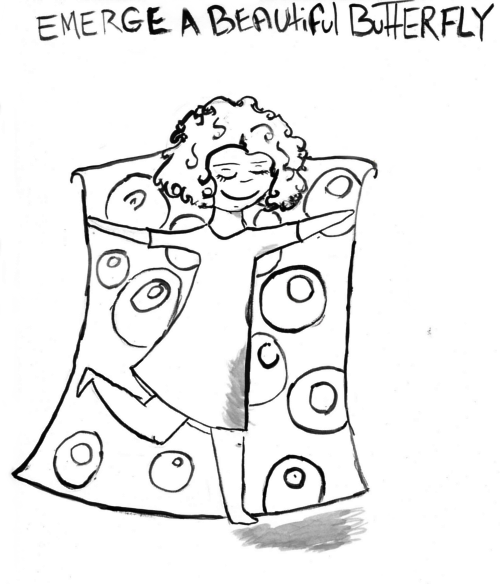 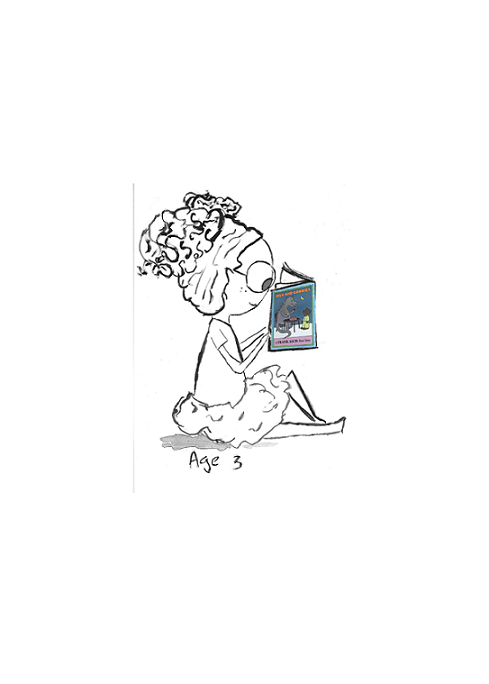 I’m really loving playing around with ink and washes, despite my previous adherence to technical pens only. My apologies to my friend Danielle, who has been trying to get me on the ink and brush bandwagon for years.

The book I’m reading is Milk and Cookies: a Frank Asch Bear Story, by Frank Asch. It wasn’t my favorite book, but I read it often. The house in the book reminded me of my Great Grandparent’s house, which I loved dearly. There was also a monster, which never hurt.

My friend Angela wrote about her childhood favorite graphic novels on her blog and it reminded me about the kind of stuff I liked to read when I was little. I’m titling this post “My favorite comics” instead of  “my favorite graphic novels” because: a) I like the term “graphic novel” about as much as I like the term “magical realism” (which is another post for another time.)  and b) the majority of these are going to be comic strips from the Sunday paper.

I took an art class in seventh grade. We spent all of one day on cartooning and I absolutely loved it. I loved the big white board cartoonists worked on, I liked how expressive cartoons could be with very few lines, I loved how well they lend themselves to comedy.  Newspaper Cartoonist became number one with a bullet on my “What I want to be when I grow up” lists, far above astronomer, artist and even writer. I had serious Calvin and Hobbes vs. Peanuts discussions.

Here is what little me looked forward to reading the most.

Cathy was genuinely my favorite comic for a while. When reading Cathy I thought “So this is what being an adult woman will be like.” Bikini angst. Shoulder pads. unfulfilling jobs. milquetoast boyfriends. hobbies: shoes, chocolate, nothing else. You lied to me, Cathy. I am so glad you lied to me.

Those apple-slice eyes are the bomb, though.

This comic has everything: an idiosyncratic art style, surrealism, dark humor, and cows. 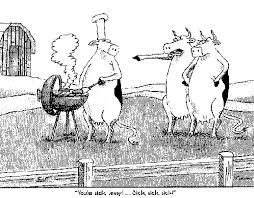 On the rare occasions my brother and I could get our mom to buy us copies of Nickelodeon magazine, I would flip straight to the back in order to read Jeff Smith’s Bone. Why did I like it? It is weird.  There are these weird  things with the last name Bone, and a girl, and her grandmother, and they go on adventure, and there are these cows. Bone combines my love of oddball protagonists, humor, and sprawling fantasy epics.

I read this on several occasions, huddled up in the back of the library (where they kept the most shameful of books- comics and pulp science fiction novels.) I didn’t know what to think of this then. This book was nothing like my beloved newspaper strips. It makes the list because the narrative was so well done that I kept reading it even after I reached the conclusion that I should probably wait until I’m older to read it.

I still don’t know what to think of this one.

It does say as a kid and a teen up there, so I guess I will pick a favorite from that strange time in high school when I actually read superhero comics.

I watched the old Adam West and Burt Ward Batman on TVLand with my dad. I grew up with Nipple Suit Batman. My brother and stepdad were reading all the dark, edgy comics like Watchmen and Frank Miller’s anything. My mom picked up Wonder Woman and anything by Gail Simone. I read along with them, but none of these grown ups in spandex taking themselves seriously spoke to me.

The Tick spoke to me. Justice League International spoke to me. The Great Lakes Whatevers spoke to me. It’s like Squirrel Girl opines: “comics are supposed to be fun.”

Fun doesn’t mean childish. Fun doesn’t mean meaningless.  As much as I love Squirrel Girl,  teenage me related most to Big Bertha. As supermodel Ashley Crawford, all anyone cared about was her looks. As larger than a house, morbidly obese Big Bertha, citizens tell her “why couldn’t I have been saved by a hot superhero?” All she wants in either body  is for people to notice her for what she can do, not what she looks like. What teenage girl can’t relate?

(yes I know about The Unbeatable Squirrel Girl. yes I am super excited to check it out. Between that and Lumberjanes I might have to start my first comic subscription.)

I’ve written about The Little Mermaid before.  I saw it when it came out in theaters. I wore out two VHS tapes rewinding and fast forwarding. (VHS is what we had before DVDs, guys). I daydreamed of having cooking shows with that French chef.  I related to Ariel and wanted to be Ursula:

I loved Ariel, I loved how she collected junk and I loved how she had a tail and adventures and a loving family but still didn’t feel normal, still wanted to have a body that made more sense to her. Like Me. I loved Ariel but I secretly loved Ursula more. Ursula was a freaky monster who lived in a cave and was a powerful witch who didn’t care that she was alone and weird because she knew how cool she was.

All of Hans Christian Anderson’s fairytales contain themes of otherness, social ostracism, isolation and salvation. The cool thing about his stories is that at the end the poor unfortunate protagonists find a place to be themselves. The ugly duckling would never have been happy living with the ducks, but he found a group of swans who accepted him for who he is. The little mermaid knew she would never be happy as a mermaid, and is willing to give up everything she has to find a world that makes sense to her. (The prince is secondary to gaining a soul.)

Of course, in Anderson’s story she gave up too much for too little and ended up not connecting to the humans (due to literally not being able to communicate). It’s not until she dies that she finds her place and purpose. Much like with The Ugly Duckling, the daughters of the air recognize the mermaid as one of their own. The reward isn’t her being accepted by the group she tries so hard to fit into, it is having a different group recognize her for her own merits and celebrating her uniqueness.

Of course three year old me only had the Disney version with the more conventional happy ending, prince and all. Still, I think the creative team behind the movie was able to express Ariel’s yearning to be “where the people are” clearly enough for three year old me to recognize and relate to it. I knew Ariel because I was Ariel: on the outside looking in, wanting to feel comfortable in my skin, wanting to live in a world that made more sense to me than the crazy magical one around me.

I’ve been thinking a lot about how stories sink their claws into you and don’t let go. I’ve also been thinking about how adults don’t often give toddlers enough credit. I taught 4-7 year olds art this summer and I saw how their little brains worked all day. I saw how they played make believe to make sense of the world around them. I saw them reverse engineer origami and pop up cards. One of my favorites (I’m not supposed to have favorites but I do and they can’t read blogs anyway so whatever) taught herself how to make a diorama based on the credits scene of a movie she saw.

And I talked to them about stories all the time because, come on, it’s me. Every one of them loved the Lego Movie, loved how it was about creating wonderful things. We read them a book about Frida Kahlo’s life that focused on her physical ailments and how she made paintings to express how she felt on the inside. The next day, there were a handful of little artists who wanted to grow up to be Frida.

I talked with my mom about it this morning, asked her what was her “Little Mermaid.” First she was all, “we didn’t have home videos back in my day, bla bla bla. But I asked her, “What is the first story in any media that you never wanted to leave?” and I asked her, “Why?” I will let her tell her own story, but I will tell you this: What she told me was the same. It wasn’t the magical elements, but something that connected to her on a personal level, something that reflected on how she felt about herself.

I’m really liking hearing these stories, so I’m going to ask you: What is the first story you never wanted to leave? Why?

GINA MINKS WANTS TO LIVE IN THE SECRET GARDEN.